This PDH or CE course discusses how commercial, government and private use of Unmanned Aerial Systems (UAS) are rapidly expanding in the United States. Although commercial use of UAS is still limited to a case by case basis, the Federal Aviation Administration began allowing companies to petition for use of UAS for commercial purposes. As of October 30th, 2015, 2020 exemptions have been granted to companies in various industries. Those companies approved to use UAS for surveying see a need for the technology, but must also weigh the capabilities and limitations of UAS to acquire and process survey data against those of more traditional methods. This study sought to answer the question of whether or not using UAS for topographic mapping and volumetric surveying can lower the cost and time to complete the same task using land surveying and manned aircraft systems while still achieving acceptable accurate results. This study compares the use of UAS within the surveying and mapping industry with traditional and accepted methods and provides a comparison of their use. Specifically, this thesis reports on tests comparing UAS data acquisition and processing for volumetric calculation and topographic mapping. Time, accuracy, and cost were compared between UAS and traditional survey methods. The results of this study showed that using UAS for topographic mapping and calculating volumes is more time and cost efficient than land surveying, with no loss in accuracy, but only when performed over bare earth terrain. The results also showed UAS to be more time and cost effective than using terrestrial Light Detection and Ranging (LiDAR), but with less accurate results. 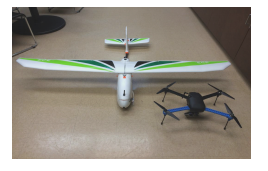 In the profession of Land Surveying, new technologies, such as the Total Station (Moffit and Bouchard, 41), Light Detection and Ranging (LiDAR) devices (Campbell and Wynne, 243), and Global Positioning Systems (GPS) (Campbell and Wynne, 393), are appropriately met with some level of skepticism. When first introduced, accuracy and precision are often compared to previously used and accepted technologies and practices to determine their scientific validity. Likewise, the introduction of Unmanned Aerial Systems (UAS) has undergone serious scrutiny regarding precision, accuracy, and therefore validity in surveying by surveyors and their clients alike. This skepticism is often countered by the claims of versatility and capability of UAS by their manufacturers and proponents. Nevertheless, studies are emerging that show that UAS is a viable alternative to traditional more costly surveying methods. For example, a recent study by McKim and Creed (2016) tested UAS to conduct UAS landfill surveys, and found that the data could be collected quickly, results were accurate to about 5cm, with less accuracy in vegetated areas.

The purpose of this study is to compare using UAS for surveying against traditionally accepted methods, so see if advantages exist in cost, time, and accuracy. One advantage of UAS that is universally acknowledged is the level of safety it can bring to the hazardous profession of aerial data acquisition. From 2003 to 2013, the Occupational Safety and Health Administration (OSHA) recorded 258 fatalities in the electric utility industry alone1, many of which involved visual inspections of electrical towers that could have been accomplished utilizing UAS. In 2014, there were five fatalities from accidents in manned rotorcraft, conducting similar visual inspection work.
Review the quiz before studying the course.